Leading as an Expat: 5 Tips to Help you Succeed in The Middle East

I’ve learned in my life that it’s important to be able to step outside your comfort zone and be challenged with something you’re not familiar or accustomed to. That challenge will allow you to see what you can do. –J. R. Martinez 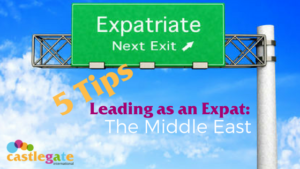 Last month we introduced you to our blog series about leading as an expat, which will explore some of the opportunities and challenges leaders can be presented with in different parts of the world, when working with teams from different regions. Today we begin our series with the Middle East.

The Middle East has been among favourite destinations for many expats who wish to boost their careers and incomes for years now. Saudi Arabia, United Arab Emirates, Qatar, Kuwait, Bahrain and others—offer a blend of thriving cosmopolitan cities and history-rich cultures. Nonetheless, as a foreigner in a Middle Eastern country you might feel like you’re from another planet sometimes.

1. Don’t be formal and overly task-focused. Remember that relationship-building is at the root of success in this region. Many of the frequent misunderstandings in professional relations come from non-verbal habits in communication. Be attentive to these cues, and try to learn them as fast as possible.

2. Network and expand your circle of influence. In some Middle Eastern countries, the Arabic word for this is “wasta” and it is fairly common that business relationships get intertwined with the matters of friendship, trust, and honour.

3. Go with the flow. This can be a tricky balance to strike as a leader, but letting go of control (sometimes) is something to which you’ll need to get accustomed. Tasks might not turnaround or things might not happen as quickly as you might like. A common phrase used in some Middle Eastern countries is “inshallah” which loosely translates to “God willing”. So being patience will become a necessary trait as a leader.

4. Be conscious of the cultural and religious needs of your team members, clients and other stakeholders. Make necessary adjustments to accommodate and get the best out of them. For example, during Ramadan, be respectful of the importance this holiday has for your colleagues and stakeholders alike. For example, maintain modest behaviour, don’t expect your team to work the same hours as usual—and simply look forward to the evenings, when celebrations take place.

5. Remain respectful and appreciative of cultural differences at all times. Work with your new reality and don’t fall into the trap of trying to impose your own cultural norms and what you have been used to. Be mindful of the impact of gravitating towards people like yourself and watch out for this in your team as well.

Leading as an expat in the Middle East will, no doubt, be challenging at first. Just keep in mind that while our tips generally apply, people are uniquely different and your success will be directly associated with being open-minded, flexible and genuine.

Are you an executive leading abroad? Are there other tips you would share with expat leaders? Contribute to the conversation in the comments section below.

Nana is a highly insightful professional, with a clear understanding of drivers, motivators and barriers to individual and team effectiveness and development. Using a combination of well recognised assessment and profile tools, coupled with her own highly tuned observational and interpretation skills she is able to offer a full range of coaching and support to individuals to develop their effectiveness, both from a career and personal perspective. She is incredibly personable and great fun to wo… END_OF_DOCUMENT_TOKEN_TO_BE_REPLACED

Nana has worked with me for a range of clients from KPMG to the Techology Strategy Board since 2004. She has always shown a deep understanding of individuals, whether in an assessment or coaching context and whether through the use of formalised tools or by applying less structured methods. She captures that understanding in writing or orally in ways that can readily be understood by the recipient. She is responsive to tight timescales and is always highly collegiate in her approach. She establi… END_OF_DOCUMENT_TOKEN_TO_BE_REPLACED

Nana possesses highly developed communication skills, and works well with clients from all different walks of life. In particular, she has demonstrated an ability to work effectively with people from all different cultures, adapting her style accordingly. Her technical skills and knowledge are of a high level and she strives to continue developing professionally through training, networking and research. Nana can work both autonomously or as part of a team. She has a great deal of positive energ… END_OF_DOCUMENT_TOKEN_TO_BE_REPLACED

Nana designed and delivered a robust and engaging leadership programme focussing on the improvement of both individual and team effectiveness for our Senior Leadership Team. She is a very intuitive individual who can be both supportive as well as direct with participants and is not afraid to ask the difficult questions to really drive individuals to understand their own motivations, capabilities and effectiveness. Giving them the responsibility to take control of their interactions within the bu… END_OF_DOCUMENT_TOKEN_TO_BE_REPLACED