Leading as an Expat: 5 Tips to Help you Succeed in America

“Our workforce and our entire economy are strongest when we embrace diversity to its fullest, and that means opening doors of opportunity to everyone and recognizing that the American Dream excludes no one.” – Thomas Perez 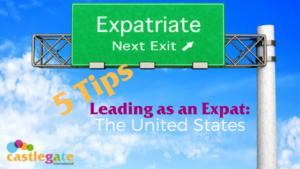 After we began our blog series ‘Leading as an Expat with the Middle East’, this month’s entry may seem like child’s play in comparison. After all, aren’t we all familiar with the US?

Americanisation is widespread, and they speak English. So when it comes to countries with superficial cultural similarities, such as a common language, it’s easy to miss underlying differences. It’s on these we’ll focus today, and what they mean for you as an expat leader in the US.

Leading in America as an Expat? These 5 Tips will Help!

1. Mind your language. You may have come across the quote “Two nations divided by a common language” (attributed to Oscar Wilde, George Bernard Shaw and even Winston Churchill). American English differs from British English, which is the English predominantly used in Europe. Therefore, it’s important to be aware of the differences in spelling, vocabulary and expressions when you’re working in the US, and even more so when you’re leading. For example, American business language is riddled with idiomatic expressions taken from sports, such as “touch base”, “game plan” and “home run”.

2. Chit chat away! Small talk is a key part of US business culture. Whereas, for example, Brits tend to use the weather as a conversation starter, and Russians don’t engage in much small talk at all. It’s not unusual to approach a stranger at a meeting or an event with a simple “Hi! I’m John”.  What’s more, “Sport-speak” is an important part of small talk in the US, so start familiarising yourself with American football and baseball right away.

3. Sell yourself. Americans are comfortable talking up their accomplishments, whereas in many other cultures, overt self-promotion is unusual and even looked down upon. As a leader in the US, you will do well to try being less humble, sell yourself and work on feeling comfortable receiving praise in public.

4. Be enthusiastic and optimistic. Enthusiasm is a cultural norm in the US. If you practice self-restraint and moderation, you may come across as uninterested and unmotivated and this may rub off on your team. It’s appropriate to be emotionally expressive (optimism being the emotion of choice) in all sorts of business settings, at times, the situation may even demand a high-five!

5. Be informal, but be on time. Americans tend to be less formal than their European counterparts in the business world, both when it comes to attitude and dress. Don’t get carried away by the informality and mistake it for laxness, though. “Time is money” as they say, and in the US punctuality is of prime importance.

It’s important to avoid overgeneralisations, especially when it comes to a country as large and diverse as the US.  The beauty of America lies in this very diversity and acceptance of different cultures. With our tips in the back of your head, you’ll figure out “The American way” in no time.

What have you noticed about US culture that we haven’t talked about in this post? How is American culture different from your own? Contribute to the conversation below.

Nana has worked with me for a range of clients from KPMG to the Techology Strategy Board since 2004. She has always shown a deep understanding of individuals, whether in an assessment or coaching context and whether through the use of formalised tools or by applying less structured methods. She captures that understanding in writing or orally in ways that can readily be understood by the recipient. She is responsive to tight timescales and is always highly collegiate in her approach. She establi… END_OF_DOCUMENT_TOKEN_TO_BE_REPLACED

Nana designed and delivered a robust and engaging leadership programme focussing on the improvement of both individual and team effectiveness for our Senior Leadership Team. She is a very intuitive individual who can be both supportive as well as direct with participants and is not afraid to ask the difficult questions to really drive individuals to understand their own motivations, capabilities and effectiveness. Giving them the responsibility to take control of their interactions within the bu… END_OF_DOCUMENT_TOKEN_TO_BE_REPLACED

Nana is a highly insightful professional, with a clear understanding of drivers, motivators and barriers to individual and team effectiveness and development. Using a combination of well recognised assessment and profile tools, coupled with her own highly tuned observational and interpretation skills she is able to offer a full range of coaching and support to individuals to develop their effectiveness, both from a career and personal perspective. She is incredibly personable and great fun to wo… END_OF_DOCUMENT_TOKEN_TO_BE_REPLACED

Nana possesses highly developed communication skills, and works well with clients from all different walks of life. In particular, she has demonstrated an ability to work effectively with people from all different cultures, adapting her style accordingly. Her technical skills and knowledge are of a high level and she strives to continue developing professionally through training, networking and research. Nana can work both autonomously or as part of a team. She has a great deal of positive energ… END_OF_DOCUMENT_TOKEN_TO_BE_REPLACED