Leading as an Expat: 5 Tips to Help you Succeed in Western Europe 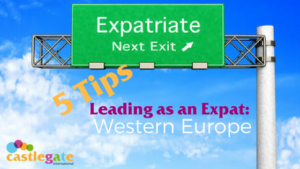 Western Europe is one of the richest regions in the world with thriving agriculture, manufacturing, banking and transport sectors, to name just a few. No wonder the region is the destination of so many expats! We are all aware of the differences between the individual countries; the languages, the cuisines, the historical heritage and so on.

However, with such geographical proximity, these countries also have overarching commonalities, making it possible for us to give you some general tips ahead of your expat assignment.

1. Direct communication. In Western Europe there’s a clear division between work and leisure when compared to other parts of the world. When it comes to business, Europeans don’t beat around the bush, but tend to get straight to the point. If you’re used to some more social lubricant, what Europeans view as efficiency may feel weird and abrupt, so you’d do well to be prepared.

2. The Protestant work ethic. In Western Europe there is a cultural norm that puts positive moral value on doing a good job. We can trace this back to what is known as “The Protestant work ethic”. As Protestantism took hold in Western Europe, so did the concept that work is morally good and hard work should be held in high regard. What does this mean for you as an expat leader? Well, it makes your job easier! The need for micro-management may not be necessary; some people may, in fact, even take offence.

3. Professionality. Formal arrangements are favoured over personal relationships, although people of course have both. Business people tend to keep a polite and professional distance to their colleagues. After work socialising often takes the form of a drink or two, but it’s good to bear in mind that getting too personal is often considered unprofessional in a culture where there’s a clear division between work and leisure.

4. Tolerance. Western Europe is, in general, very tolerant and there’s great emphasis on human rights and free speech. Expressing negative views about any group of people is considered politically incorrect and will not be well-received. You should also avoid making jokes that may be perceived as racist/ sexist/ homophobic.

5. Be on time! Being punctual is of great importance in Western Europe where everything is thoroughly planned. People are used to punctuality, be it public transport or business meetings. Tardiness is looked down upon and viewed as unprofessional. So, if you want to be respected as a leader in Western Europe, be on time!

Remember, these are only general tips and there are huge cultural differences in Western Europe. English is the commonly spoken language for business and the tips above provide you with some general guidelines, but efforts to speak the local language and learn more about the local culture are always greatly appreciated.

Do you have any country specific tips for Western Europe? What are your expat experiences? Please, contribute to the conversation below.

Nana designed and delivered a robust and engaging leadership programme focussing on the improvement of both individual and team effectiveness for our Senior Leadership Team. She is a very intuitive individual who can be both supportive as well as direct with participants and is not afraid to ask the difficult questions to really drive individuals to understand their own motivations, capabilities and effectiveness. Giving them the responsibility to take control of their interactions within the bu… END_OF_DOCUMENT_TOKEN_TO_BE_REPLACED

Nana has worked with me for a range of clients from KPMG to the Techology Strategy Board since 2004. She has always shown a deep understanding of individuals, whether in an assessment or coaching context and whether through the use of formalised tools or by applying less structured methods. She captures that understanding in writing or orally in ways that can readily be understood by the recipient. She is responsive to tight timescales and is always highly collegiate in her approach. She establi… END_OF_DOCUMENT_TOKEN_TO_BE_REPLACED

Nana possesses highly developed communication skills, and works well with clients from all different walks of life. In particular, she has demonstrated an ability to work effectively with people from all different cultures, adapting her style accordingly. Her technical skills and knowledge are of a high level and she strives to continue developing professionally through training, networking and research. Nana can work both autonomously or as part of a team. She has a great deal of positive energ… END_OF_DOCUMENT_TOKEN_TO_BE_REPLACED

Nana is a highly insightful professional, with a clear understanding of drivers, motivators and barriers to individual and team effectiveness and development. Using a combination of well recognised assessment and profile tools, coupled with her own highly tuned observational and interpretation skills she is able to offer a full range of coaching and support to individuals to develop their effectiveness, both from a career and personal perspective. She is incredibly personable and great fun to wo… END_OF_DOCUMENT_TOKEN_TO_BE_REPLACED