Leading as an Expat: 5 Tips to Help you Succeed in the Far East

“Deeply rooted in the Chinese concept of face are conceptualizations of a competent person in Chinese society: one who defines and puts self in relation to others and who cultivates morality so that his or her conduct will not lose others’ face” – Yvonne Chang, Cultural ‘Faces’ of Interpersonal Communication in the U.S. and China (2008) 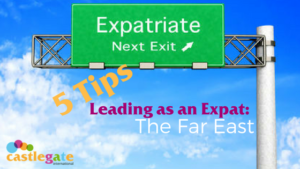 Japan is the most industrialised country in the Far East, but South Korea, Taiwan, Singapore and Hong Kong are sometimes referred to as “the four tigers” because of their recent rapid modernisation and economic development. China, as we all know, is the largest economy in the world. Business culture in the Far East is heavily influenced by Confucianism. On a general level, this means that companies tend to be hierarchically organised, and relationships highly valued. Here are five tips to keep in mind when you’re leading as an expat in the Far East.

1. Face. Simplified, saving face could be defined as the prevention of embarrassment at all costs. However, strongly related to Confucianism, losing face is about more than simply feeling embarrassed. People spend their whole lives building prestige and reputation. Losing face means that your ability to function as part of the social order has been damaged. As someone in a leadership position, it is especially important that you make efforts to understand “face”. Failure to do so may lead to awkwardness at its best, and burned bridges at its worst.

2. The importance of business cards. For a businessperson to be without a card is like a samurai going off to battle without his sword. Being out of cards is considered bad form, so always ensure your card holder is full. Before you go off on your expat assignment, you would do well to invest in a good quality card holder, appropriate for your leadership role.

3. Use both hands. It is considered respectful to give and receive things with both hands. There’s no need to emphasise the importance of doing so especially when exchanging business cards, but try to get used to using both hands in all situations where an object changes hands.

4. Be visual. Far Eastern languages are ideographic, i.e. these cultural groups tend to be visually-oriented. Keep this in mind and try to use visual material such as diagrams, charts and drawings when making presentations.

5. Less is more. In stark contrast to other parts of the world, such as the Middle East or the Mediterranean in particular, people in the Far East tend to be less emotionally expressive. Avoid large gesticulation and make sure you don’t get too physically close to people, as personal space is valued in the Far East.

Keep these tips in mind, see Confucianism as an overarching theme, and you’ll be a great success as a leader in the Far East.

Do you have any personal experience of the concept of “face”? What is the most important thing you’ve learnt working in a culture different from your own? Please, contribute to the conversation below.

Nana has worked with me for a range of clients from KPMG to the Techology Strategy Board since 2004. She has always shown a deep understanding of individuals, whether in an assessment or coaching context and whether through the use of formalised tools or by applying less structured methods. She captures that understanding in writing or orally in ways that can readily be understood by the recipient. She is responsive to tight timescales and is always highly collegiate in her approach. She establi… END_OF_DOCUMENT_TOKEN_TO_BE_REPLACED

Nana designed and delivered a robust and engaging leadership programme focussing on the improvement of both individual and team effectiveness for our Senior Leadership Team. She is a very intuitive individual who can be both supportive as well as direct with participants and is not afraid to ask the difficult questions to really drive individuals to understand their own motivations, capabilities and effectiveness. Giving them the responsibility to take control of their interactions within the bu… END_OF_DOCUMENT_TOKEN_TO_BE_REPLACED

Nana is a highly insightful professional, with a clear understanding of drivers, motivators and barriers to individual and team effectiveness and development. Using a combination of well recognised assessment and profile tools, coupled with her own highly tuned observational and interpretation skills she is able to offer a full range of coaching and support to individuals to develop their effectiveness, both from a career and personal perspective. She is incredibly personable and great fun to wo… END_OF_DOCUMENT_TOKEN_TO_BE_REPLACED

Nana possesses highly developed communication skills, and works well with clients from all different walks of life. In particular, she has demonstrated an ability to work effectively with people from all different cultures, adapting her style accordingly. Her technical skills and knowledge are of a high level and she strives to continue developing professionally through training, networking and research. Nana can work both autonomously or as part of a team. She has a great deal of positive energ… END_OF_DOCUMENT_TOKEN_TO_BE_REPLACED