Leading as an Expat: 5 Tips to Help you Succeed in Africa 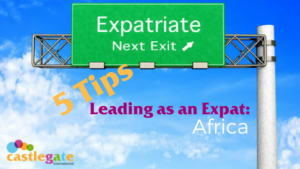 Media coverage has often emphasised the negative sides of Africa; the wars, the famine, the disease. However, the continent which is the birthplace of humankind has a lot to offer culturally, in terms of natural resources and in the way of business; in fact business is thriving and there are expat communities across the continent.

When it comes to business culture, Africa should neither be seen as one country (which, surprisingly, it still is by some), nor 54. Africa is huge, diverse, complex and rich. There are overarching regional differences reflecting the colonial past, as well as differences both between and within countries. Safe to say, Africa does not lend itself well to generalisations.

With this in mind, here are some general tips on how to succeed as an expat leader in Africa.

1. Nice and slow. In Africa the pace is slower and the outlook more long-term. This does not mean Africans are not able to take quick decisions, but it emphasises the importance of consultation and consensus in the decision making process. Drop-ins are commonplace in African business culture, and interruptions are to be expected. This may all be frustrating for someone coming from a more fast-paced culture. As a leader in an African country, it’s important that you don’t show impatience or annoyance with these interruptions and the decision making process as a whole.

2. Socialising is key. Socialising is important and often a prerequisite for doing business. Some outsiders misinterpret the emphasis on leisure to mean laziness, whereas in fact leisure and socialising form the groundwork of group solidarity, something central in many parts of Africa. The importance of extended family, community, and the fun inherent in many African cultures means that it may take a couple of visits to the golf course or a night at a local restaurant before you get acquainted and can even start discussing business.

3. Respect the hierarchy and the religions. Many African countries are not egalitarian, and respect for hierarchy is considered good social behaviour. Always identify the key person; this will usually be the most senior person; and try to gain access to them. This person will make the decisions, but only after consensus up and down the hierarchy has been built. Although the majority of people in Africa adhere to Christianity and Islam, these are often combined with the beliefs and practices of traditional African religions. Therefore, you would do well to inform yourself of the particular religious beliefs of your colleagues and/or business partners.

4. Don’t be so obsessed with exactitude. The most successful people in traditional societies were not those who made rigorous forecasts, but those adapting to the flux. This behaviour may not always be as risky as perceived in the west, and more valuable than realised. As a leader in Africa, you’ll find there’s great potential hidden if you can move past this cult of precision.

5. Yes means maybe. In some African cultures, agreeing with someone is a sign of respect. As a leader it’s important to follow-up with your team and keep an eye on deals with potential business partners to make sure that that “yes” was not in fact a “maybe”.

Try not to generalise and see our tips as general guidelines, and you’ll do a great job as a leader in Africa.

Do you have any experience of African business culture? What have you learnt working in a culture different from your own? Contribute to the conversation below.

Nana has worked with me for a range of clients from KPMG to the Techology Strategy Board since 2004. She has always shown a deep understanding of individuals, whether in an assessment or coaching context and whether through the use of formalised tools or by applying less structured methods. She captures that understanding in writing or orally in ways that can readily be understood by the recipient. She is responsive to tight timescales and is always highly collegiate in her approach. She establi… END_OF_DOCUMENT_TOKEN_TO_BE_REPLACED

Nana possesses highly developed communication skills, and works well with clients from all different walks of life. In particular, she has demonstrated an ability to work effectively with people from all different cultures, adapting her style accordingly. Her technical skills and knowledge are of a high level and she strives to continue developing professionally through training, networking and research. Nana can work both autonomously or as part of a team. She has a great deal of positive energ… END_OF_DOCUMENT_TOKEN_TO_BE_REPLACED

Nana is a highly insightful professional, with a clear understanding of drivers, motivators and barriers to individual and team effectiveness and development. Using a combination of well recognised assessment and profile tools, coupled with her own highly tuned observational and interpretation skills she is able to offer a full range of coaching and support to individuals to develop their effectiveness, both from a career and personal perspective. She is incredibly personable and great fun to wo… END_OF_DOCUMENT_TOKEN_TO_BE_REPLACED

Nana designed and delivered a robust and engaging leadership programme focussing on the improvement of both individual and team effectiveness for our Senior Leadership Team. She is a very intuitive individual who can be both supportive as well as direct with participants and is not afraid to ask the difficult questions to really drive individuals to understand their own motivations, capabilities and effectiveness. Giving them the responsibility to take control of their interactions within the bu… END_OF_DOCUMENT_TOKEN_TO_BE_REPLACED