How To Avoid Team Dysfunctions

“Successful teamwork is not about mastering subtle, sophisticated theories, but rather about combining common sense with uncommon levels of discipline and persistence. Ironically, teams succeed because they are exceedingly human. By acknowledging the imperfections of their humanity, members of functional teams overcome the natural tendencies that make teamwork so elusive.” – Patrick Lencioni 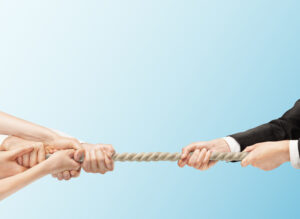 There are many noted benefits of working in a team. Not only can teamwork foster creativity and encourage productive risk-taking, but it also combines the strengths of all the team members into one dominant force. Working in a team environment is always a learning experience, and it often has excellent results.

However, teamwork  can come with its own unique frustrations and challenges, and these difficulties are often exacerbated by specific dysfunctions that commonly occur in groups.

In his book, “The Five Dysfunctions of a Team,” Patrick Lencioni outlines the primary causes of a team failing to succeed or thrive by using a pyramid structure. According to Lencioni, the five primary dysfunctions are:

It certainly isn’t hard to see why these five elements would cause dysfunction and disruption within a team, but resolving these issues is another thing entirely.

Each of these elements plays its own role in dysfunction, but it’s important to note they are all interconnected with one another. When one level of dysfunction comes into play, there is often a domino effect that causes further dysfunction. When you notice any malfunction in your team, it’s useful to pinpoint the dysfunction you’re experiencing on the pyramid, and then go one step down to see if that’s the cause.

As a leader, the responsibility of resolving team dysfunctions often comes down to you, and your team will look to you for guidance in stressful situations. There are several things you can do to ease team dysfunctions and, once implemented, it won’t take long to see their positive effects.

The most effective way to tackle all five dysfunctions of a team is to lead by example and be a positive role model for your team.

If your team isn’t results-oriented:

Make sure a project or task’s desired results are clearly explained. Often, team members may be more focused on personal goals than those of the entire team, and this interferes with the overall success of the team. To avoid this, track your team’s goals for all to see, and publicly celebrate when these goals are achieved.  If your team knows exactly what the ultimate goal of a project is, they’re more likely to focus on achieving that specific objective. Reinforce the importance of the goals you set for your team by communicating the particular benefits of achieving those goals. There isn’t room for ambivalence in teamwork, so every assignment’s intended target needs to be communicated by the leader throughout the course of a project to keep the team on track.

If your team avoids taking accountability:

If your team lacks commitment:

Make sure your team members know their opinions and voice are valued by giving everyone the chance to be heard. A team member lacking commitment will have difficulty making decisions they stick to. Committing one’s full self to a project can be challenging when they feel as though their contribution isn’t weighted as highly as that of other team members. Everyone on your team needs the chance to make their opinions and input heard, and they’re more likely to commit to the project when they don’t feel as though their efforts are taken for granted. A team aligned around common objectives is more likely to commit to their decisions and complete a project successfully.

If your team fears conflict:

Work on communicating efficient conflict resolution methods with your team. Once your team sees that conflict isn’t always the end of the world and it can be resolved peacefully, they’re more likely to tackle issues head-on. A group who fears conflict often displays artificial harmony, and while everything may look okay on the surface, there can be profound dysfunction happening below that is interfering with productivity and other critical elements of a successful team. Demonstrate examples of positive conflict to your team and show them that working through these situations leads to a more unified team and doesn’t always result in tension and discomfort.

If your team displays an absence of trust:

Showcase your faith in your team and don’t hold back from displaying your confidence in those you lead. Plan team building activities for your group where you can bond as individuals and form stronger, trusting relationships. When you give your team the opportunity to see their team members in more human and vulnerable situations, it builds strong bonds. A lack of trust leads to invulnerability, so your team also needs to see their leader put their own vulnerability on display to show them they can do the same. The absence of trust sits at the bottom of Lencioni’s pyramid because everything is built on trust, and without it, a team is bound to be dysfunctional.

While some level of dysfunction in any team is common, there are specific powerful steps a leader can take to minimise the dysfunction and promote a harmonious work environment and an efficient team.

Which of the five dysfunctions have you spotted in your team? What have you done to ease the dysfunction? Join the conversation below!

Nana has worked with me for a range of clients from KPMG to the Techology Strategy Board since 2004. She has always shown a deep understanding of individuals, whether in an assessment or coaching context and whether through the use of formalised tools or by applying less structured methods. She captures that understanding in writing or orally in ways that can readily be understood by the recipient. She is responsive to tight timescales and is always highly collegiate in her approach. She establi… END_OF_DOCUMENT_TOKEN_TO_BE_REPLACED

Nana designed and delivered a robust and engaging leadership programme focussing on the improvement of both individual and team effectiveness for our Senior Leadership Team. She is a very intuitive individual who can be both supportive as well as direct with participants and is not afraid to ask the difficult questions to really drive individuals to understand their own motivations, capabilities and effectiveness. Giving them the responsibility to take control of their interactions within the bu… END_OF_DOCUMENT_TOKEN_TO_BE_REPLACED

Nana is a highly insightful professional, with a clear understanding of drivers, motivators and barriers to individual and team effectiveness and development. Using a combination of well recognised assessment and profile tools, coupled with her own highly tuned observational and interpretation skills she is able to offer a full range of coaching and support to individuals to develop their effectiveness, both from a career and personal perspective. She is incredibly personable and great fun to wo… END_OF_DOCUMENT_TOKEN_TO_BE_REPLACED

Nana possesses highly developed communication skills, and works well with clients from all different walks of life. In particular, she has demonstrated an ability to work effectively with people from all different cultures, adapting her style accordingly. Her technical skills and knowledge are of a high level and she strives to continue developing professionally through training, networking and research. Nana can work both autonomously or as part of a team. She has a great deal of positive energ… END_OF_DOCUMENT_TOKEN_TO_BE_REPLACED